The People of Peace

June 09, 2014
Late yesterday I returned from a thoroughly lovely weekend in Glastonbury attending the 50th anniversary OBOD gathering. I'm not actually a member, but was encouraged to go by several friends who are, in order

to meet new people and broaden my social horizons. Which it most certainly did.
Not being terribly organised I left booking a B&B rather late and the town was swamped, so ended up in one of the villages. It was a nice place to stay, but slightly limited sociability in terms of relying on a friend to drive back there rather than staggering back after making merry.
Thankfully there was plenty going on during the day, and I found myself drawing inspiration from things that could be included in rituals back here in Ipswich ~ such as the rolling chants (though that would most likely need lots more people than we have to be really effective).
On Friday I attended an LGBT group, which was far better attended than I think anyone had expected, with some interesting and thoughtful people with some good stories to share. People were genuinely friendly and welcoming, and there was a certain nostalgia value in meandering the streets of Glastonbury looking at all the shockingly overpriced crystals, spangles and tat (with the occasional beautifully crafted piece hidden amongst the tourist tack).
Ronald Hutton's informal talk on Saturday morning about the history of revival druidry was very funny and fascinating. I had not realised quite how closely aligned the early movements had been with politically radical humanitarian campaigning groups.
The section in which people decked out with tree/ogam imagery each recited a relevant verse stimulated all sorts of creative ideas for later reflection.
After some more socialising we eventually went up the Tor where I watched a celebratory ritual, and was able to join in some bits which I understood (like the chanting). There are a number of differences between what OBOD do and what I do, both in terms of the ritual structure and the beliefs that underpin it, but it was intriguing to watch. The Tor is, as always, an amazing place to be with spectacular views and a wonderful vibe. As mentioned in a previous post, the Tor is traditionally considered the home of Gwynn app Nudd, leader of the Tylwyth Teg (People of Peace), a euphemism for the wild faeries.
A lot of the OBOD ritual was given over to mention of peace, though I must confess my own thoughts were running along other lines with alternate understandings of the fairies ~ not only the use of the word as an insult, but also deeper, more subversive uses of the term for the followers of Gwynn.
The evening entertainment was enjoyable, most especially the opera singer. I loved the fact that they included opera, instead of just assuming all pagans want to listen to off-key folk music. Intoxicated by the home brew mead, I became embroiled in some intriguing conversations with some enchanting people.
Sunday was spent signing and selling books, plus a lovely lunch with some excellent company and a last wander round town. I left feeling properly alive for the first time in years, and inspired to write poetry (which may get posted up here in time). Getting home I found a few things had changed in other people's lives, some of which took decisions out of my hands and left me better able to make some plans for what I want out of the future. Onwards and upwards!
Celtic Myth Druidry Gay Gods Pagan People Poetry

I don't know whether this podcast will be of the remotest interest to the people who attend to this blog (all three of you), but I created it as a supplemental guide for students on the Legal Ethics module for the Ethics degree at the University I teach in. It's a consideration of what the function of law is - part of the module explores functionalist issues in this regards, and I appreciate this podcast might be a bit disjointed for anyone who doesn't have that background context. However, the lightning quick gloss is that - in most legal systems both modern and ancient - the law is punitive. An act is outlawed by the legislature (Parliament in our case) and a punishment dreamed up for it to discourage people from engaging in the criminalised activity. That's not the only function of law, but most theorists would argue it is the central one. I've been following some of the arguments made by people around banning parents smacking their children (laws are already in
Read more 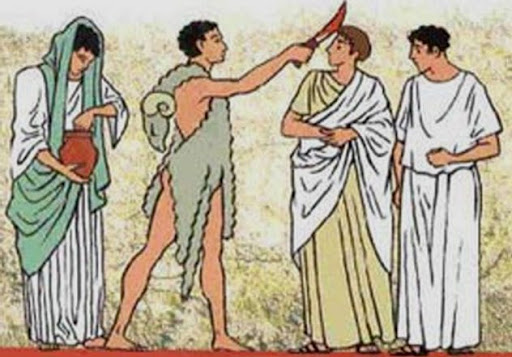 In Ancient Rome, the festival of Lupercalia was held on February 15th. In legend the twin-founders of the city, Romulus and Remus, were thrown into the River Tiber on the orders of their usurping great-uncle Amulius. The babies washed ashore by a wild fig tree, and were found by a she-wolf, who suckled them and raised them with her mate. Years later they were found, living feral, by the shepherd Faustulus and his wife Acca Larentia who took them in. Upon reaching adulthood they discovered their true identities, and set out to avenge themselves on their wicked great-uncle. Having killed him, they founded the Eternal City. Once restored to their regal position, the brothers rediscovered the den and called it the Lupercal (the wolves cave.) It became a sacred site along with the remains of the shepherd's hut. The Lupercalia ritual in Rome was held in the cave itself. Similar rituals held in other parts of the Empire had to use venues symbolic of the cave on Mount Aventine. Two
Read more