November 02, 2013
Last night I went to a Halloween party at a local gay pub, where almost everyone was in costume ~ some of them quite elaborate. Thankfully I recognised a friend and was able to spend much of the evening chatting to him and, contrary to my expectations of such events, found that I really rather enjoyed the evening. Halloween is a very curious time of year, distinct from but intertwined with the ancient Gaelic feast of Samhain, and I was struck by the liminal nature of both the gathering and the date in general. Though British society is centuries ahead of places like Iran in its integration of sexual minorities, those attending were still people whose place in society is decidedly out of the mainstream ~ not only gays, lesbians and bisexuals but those whose gender places them as neither entirely one thing nor another, transsexuals and cross-dressers. There were also a small group of people with learning difficulties, who appeared to be loving every moment of the karaoke event and finding acceptance there.
Not many people in British society would still condemn sexual and gender minorities as monsters that warrant imprisonment or execution or forced "cures", but it is not that many years since mainstream society condemned us as such ~ and, of course, in many nations and religious subcultures around the world this is still very much the case. So there we were, monsters dressed as monsters, and enjoying the fact. Whatever its Catholic origins, modern Halloween has become a festival to celebrate the frightening and grotesque - mostly, but not entirely, from the cinematic world. Dressing up as vampires, zombies and the like does make the monstrous more palatable, less scary. Which is partly the point, of course; Halloween as a way of dealing with that which frightens us and getting a handle on dangers both symbolic (werewolves), metaphorical (Grim Reapers), and somewhat more worldly (serial killers). Yet it can also be a way to confront those rather more immediate worries many people have about sexual and gender ambiguity, mental disturbance (as various supermarkets found to their cost), and violence. 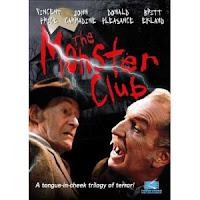 There's a terrible cheesy - but no less enjoyable for it - Vincent Price flick called The Monster Club, based on a book by the late and underrated Ronald Chetwynd-Hayes. The premise of book and film is a sort of Gentleman's Club for supernatural monstrosities to socialise with each other in. Those who exist on the perimeters of society, especially those who are often feared, need  times and safe places to gather and affirm that which makes them, in the eyes of outsiders, monstrous. A time to rejoice rather than accept the hostility or misunderstanding. For 21st century paganism, given that we are also an oft-feared minority, the feast of Samhain becomes increasingly a celebration not only of ancestral presences but also of the people of the darkness, which these days includes the very people marking that festival. Even if paganism once again becomes completely mainstream, or sexual/gender minorities are fully integrated, I think it will be worth having a time of year when we stop to remember that we once were monsters, which might aid our future descendants to think more kindly towards whoever gets cast in the role of dangerous outsider in their time.
Books Celtic Myth Gay Ipswich Undead