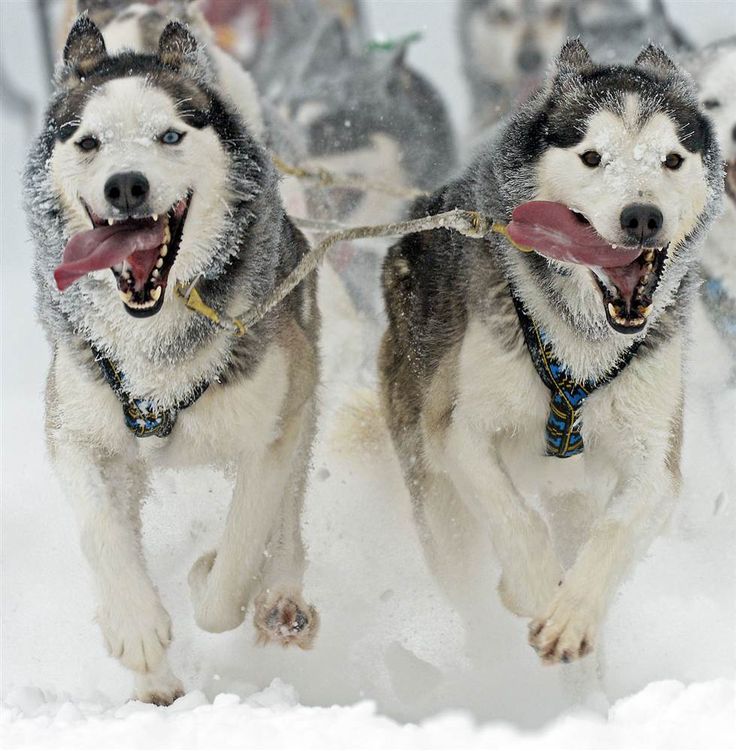 This poem has been rather slow in the writing (it's taken  me about three years to finish it off, and many might not think it worth the time!)
I'm not wholly happy with the final verse, but it seems quite long enough as it is - but maybe I'll rewrite that verse in time. The poem is offered as a sort of pagan alternative to The Night Before Christmas, with a nod to Hans Christian Anderson on the way, and fuses Russian myth with British folk figures. You can regard it as a Frankenstein mess, or as reflective of the near-global pagan practice of syncretism. Or just class it as a daft kid's poem!
The sled pack will eventually appear in another poem of their own, as they do not wish to be thought of as a one trick husky team. The metre, whilst similar to some Irish forms, is a random one I made up for the purposes of the poem - call it robinian metre if you fancy using it in a work of your own!

“Sleep my son, sleep, on this darkest eve,
Outside the White Maidens flakes do weave;
Warps of ice, wefts of snow;
Let silence flow, unto midnight cleave”.

“Rest has flown, the night is far too deep
Tell me a story to help me sleep -
Yarns of frost, chords of rime
To freeze time whilst nightmares outside creep.”

By wolf and belling stag echo still
In cathedrals of wood, the choir’s skill
Grants to the fearful mind
Forms to which eye is blind, winter’s quill

Transforms bare trees into works of art -
Ice giants looming, a live rampart.
Amidst the ents he lands,
Grandfather Frost stands on his sled-cart.

Ancient is he, Lord of the Ice Age,
Culler of the unloved, not harsh mage
But healer of the tired
Takes the expired on to their next stage.

“Father, where does he dwell, this strange sprite
Who rides with dogs in the dead of night?
Not fearful but so wild.”
The boy smiled, snug and safe from frostbite.

So his sire described the ice-built Hall
Where lived Grandfather ~ called Summer’s Fall
By his dearest grandchild,
Where snow dogs, wild bears, and seals held thrall.

There his seat since the Age of Great Beasts.
Joyful mortals partake in his feasts,
Most of all solstice night
When Earth’s might is praised by pagan priests.

A ragged lad huddles by the hedge,
The dogs sniff the air, from darkness dredge
His tired and hungry scent,
Grandfather kneels, makes to him a pledge.
See, that boy of ten runs to the sled,
Takes a seat near the dogs, at the head.
It could be you, my lad;
How glad he is to chase the white thread!

“The what?” asked the child, wide-eyed in bed.
“The long path down which all hope is led,
Old Frost’s dogs love the scent.
Veil rent by his blade, gives them their head.”

Sled bells jangling, dogs yipping, they ride
Through the rift, sealing behind they glide
Deep into winter’s realm,
Old Frost at the helm, the stars their guide.

Swarmed by huskies, the boy and the maid
Drank and dined well whilst on harp she played.
Tails wagged as ears were stroked,
Thus dog-cloaked their stories they did trade.

Came then Old Man Frost, bargains to make –
Riches untold for the young lad’s sake
Robes for rags, gold for lead,
Living for dead, his oath the boy spake.

In cloth of snowflakes young Jack was sworn
To the Clan of Frost, his shade reborn
Pauper no more, but Sprite
To aid the plight of all the forlorn.

Grandson adopted is this wild Jack,
Bringer of Snow Days, leading the pack
Of wild boys and girls, freed
From their toil, from the hard tyrant’s rack

To run and rejoice – snowmen to build
And balls to throw; the weary are thrilled
To be children again
And recall when pure joy did life gild.

When deathly cold the poor outcasts claim,
It is not they who receive the blame.
To Summer’s Fall they fly;
The rich who stood harsh by bear the shame.

And so my son, as your eyes now close,
Hear that whom the Gods love, no-one knows.
Mere wealth and might count not.
Humble Jack received their gift – blest snows!