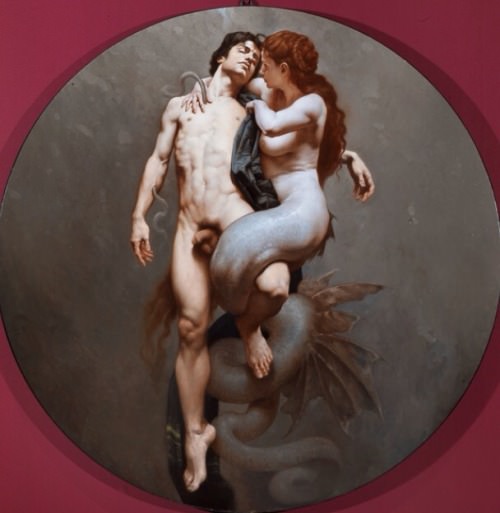 This is the tale of how the stunningly handsome Hermaphroditus met the beautiful but unbalanced bunny boiler Salmacis, and eventually became the being we know today. As an account of  obsessive love, it is rather disturbing given that the victim can never escape the clutches of their "stalker". A less unsettling interpretation might be that this describes a psychotic fracture where the fixated Salmacis internalises an imago of Hermaphroditus (his falling into her pool) forever in her unconscious, partially losing her own individuality along the way. Whilst the real man legs it stage left, she spends the next thirty years rocking and twitching in a room whose walls are smothered with photographs of her idol, refusing to wash the hand that touched his cheek.
The traditional myth speaks of the curse on the pool at Caria, near the bottom of Mount Ida where the waters feminised men. Given today's gender politics this view would doubtless be lambasted as sexist, patriarchal, and what have you. However, when the story was first doing the rounds the Greek cities were warrior states that valued machismo and associated femininity with a gentleness unsuited to the military life. Were their men to become too soft in body or mind, they feared (doubtless correctly) that rival states would simply slaughter them and seize their lands. In more peaceful times perhaps there is less need for guardians at the gates, and maybe these days military technology is reducing the need for macho toughness (though frankly I feel much safer with human soldiers than with Terminator and the Rise of the Machines)... however, there will be plenty of people who suspect that the world is not really as safe and peaceful as we would like to think it is and political piranhas are always circling, looking for a weakness.
To some the waters of Caria might seem more blessing than curse. Presumably the distinguishing factor being whether a person drinks from them knowingly or gets shoved in against their will.